Available from 404 Ink, the brand new edition of The Goldblum Variations (with extra stories) is out soon in the UK. Pre-order if you’d like a little slice of Jeff straight to your door.

Ditto the Penguin US edition! For Jeff Goldblum stans on the either side of the Atlantic, head here.

Pre-orders help both the publisher and the author – both financially and mood-wise. So if you’d like to read it, do go ahead and buy a present for future you. Or perhaps a Christmas present? It is just the right size for someone to sneak away to read in one sitting, beside a nice scented candle as a storm blows around outside.

I don’t know about you, but 2018 has started off, as years often do, as dark and quite gloomy. My heating has broken down again. The snow is incoming here in Edinburgh, but there’s something quite exciting that’s countering my chill –

The first review of Mayhem & Death has been published, and, delighted with its positivity, 404 Ink have decided to launch pre-sales for the bundle of both the new Mayhem & Death and new release of On the Edges of Vision.  On the Edges of Vision won the Saltire First Book of the Year back in 2015, and with the press that put it out shuttering, it had gone out of print until 404 zoomed in and saved it. You can get the sparkly new edition along with its sibling for just £15.

On the Edges of Vision

In On the Edges of Vision, unease sounds itself in the language of legend. Images call on memory, on the monstrous self. Throughout Helen McClory’s daring debut collection, the skin prickles against sweeps of light or darkness, the fantastic or the frightful; deep water, dark woods, or scattered flesh in desert sand. Whether telling of a boy cyclops or a pretty dead girl, drowned sailors or the devil himself, each story draws the reader towards not bleakness but a tale half-told, a truth half-true: that the monster is human, and only wants to reach out and take you by the hand.

Helen McClory returns delving deeper into descriptively mythical yet recognisable stories woven from dark and light, human fear and fortune. Swimming and suffering. Spikes loom ever-threatening. A weight against the throat. Sea where the dead lie pressed into a layer of silt. A silent documentary through a terrible place. Mary Somerville, future Queen of Science. A coven of two. Mayhem & Death is the matured, darker companion to On the Edges of Vision and shows McClory’s ever expanding ability to envelop and entrance her readers with lyrical language of lore, stunning settings and curious characters. Mayhem & Death also introduces the brand new novella Powdered Milk, a tale for the lost.

Why should you pre-order? I mean, other than because you might want to make sure two books of uncanny, watery, flash fiction, short stories, prose poems and the like are in your hands as soon as they can be? Well, pre-ordering helps indie publishers immensely if you buy direct from them, avoiding the large online retailer who shall not be named, who frequently undercuts pricing to the point where no one (not even them) make a profit off sales of a book. Supporting via pre-sales allows indie publishers, who work on a hair-thin margin and reserves of passion, to keep the lights on. I’ve mentioned before, but Heather McDaid and Laura Jones, the founders of Award-winning 404, are two amazing young women. They take risks, work incredibly hard, and put out books that other publishers might not even think to pick. Buying from them, whether my book or others, puts your money in their capable hands. You can imagine in doing so you become a kind of minor Medici of the publishing world. All that, and you get books to keep you company on your (armchair) travels.

Pre-order here for delivery anywhere. Or use the link to browse the site. It’s Friday, it’s dark – why not buy a little gift for future you?

Filed under 404 Ink, Helen McClory, On The Edges of Vision, Uncategorized

The Unsung Letter No. 48

Michelle Bailat-Jones writes this week’s Unsung Letter on a book with shades of Barbara Comyns (one of my favourite writers):

[redacted] tells the story of a peculiar family—nine children, two parents—living in a large house on the outskirts of a small city. In many respects, they are an experiment, a utopia created by the parents according to very specific rules. The greatest of which is their near complete isolation from anyone else excepting a weekly trip to the library. While this house and family can be considered a utopia, it is one without a moving force; it has turned inward and become frozen.

Read the full thing here – and sign up to receive The Unsung Letter here. Each week brings a different writer/book lover on an underhyped book that might just change your life.

Small reminder – if you’d like, you can buy my pamphlet The Goldblum Variations here for £5. It’s a book of absurdist micros on a celebrity/plurality of worlds/beings. It would make a charming stocking stuffer for someone who would like an excuse to be off reading by themselves (or someone who likes to read stuff aloud to others – it’s short and sweet). You can check out reviews and add it to your Goodreads list, if that’s the kind of thing you do here. 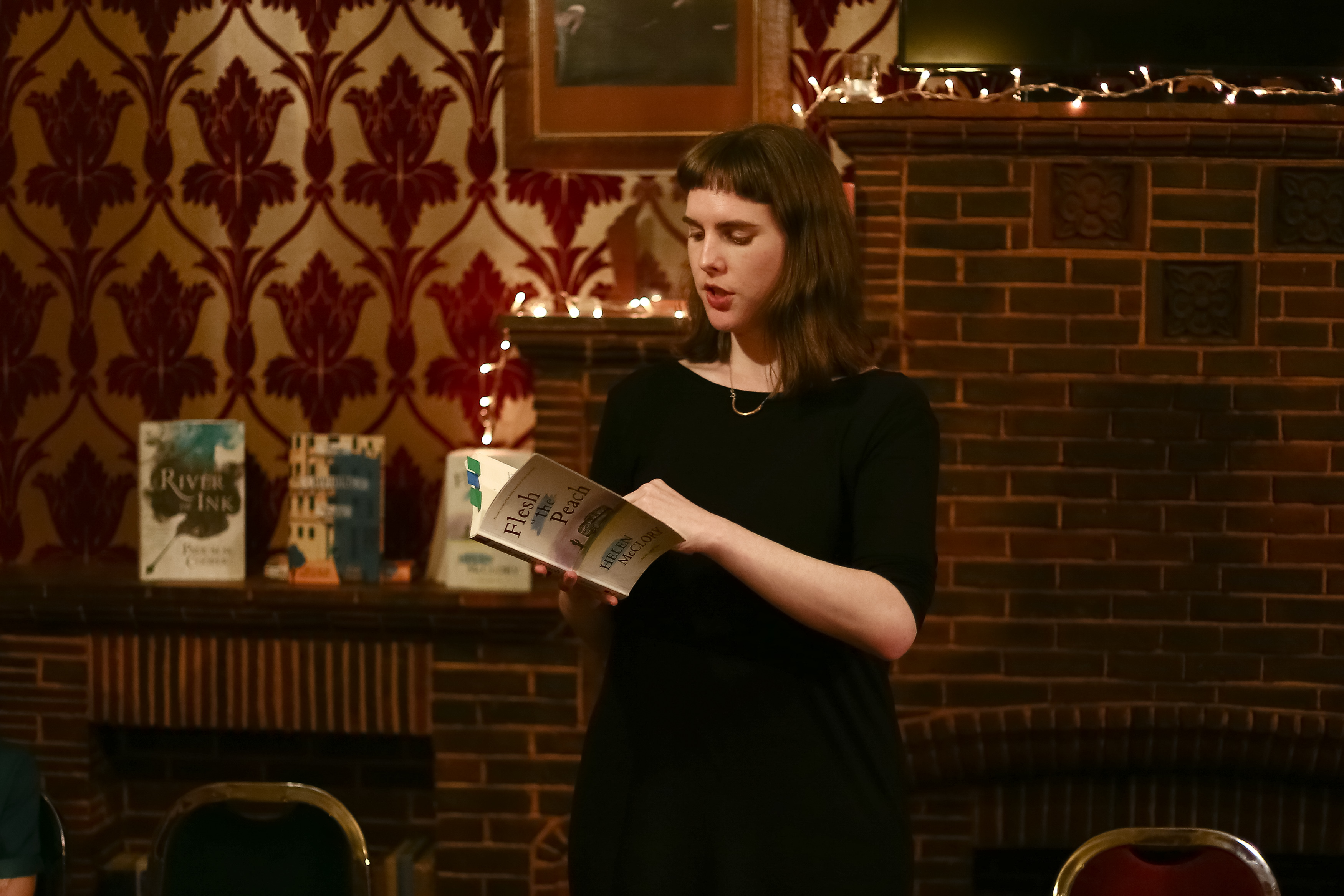 Back in May, I had the delight of meeting with The Riff Raff founders Amy Baker and Rosy Edwards and appearing at their Effra Social event (as reported here) AND while I was there, Amy and Rosy interviewed me for their podcast. It was so much fun to do and you can listen to the whole thing here.

It’s about half an hour long. and covers topics like how one writes, the oddities that come out of travelling for research, and finding your genre. I hope you enjoy.

Today you can read your way across America with me – over on Books for Women, Women’s Books:

NEW YORK CITY:  All aboard at Port Authority Bus Terminal. Find your seat and strap in. There are so many choices for the city that loves to read about itself, so I’ve gone for two…

Also you might have missed these two excellent reviews of Flesh of the Peach, in Scots Whay Hae and The Bottle Imp. My heart.

Additionally, some good things are brewing with both On the Edges of Vision, currently out of print after the shuttering of Queen’s Ferry Press, as well as for the nascent second collection (and the novella that goes along with it). Firm news when I have it to share.

Flesh of the Peach – On The Night

What a wonderful evening – thank you so much to all who came out to celebrate Flesh of the Peach last night at Blackwell’s South Bridge, and a huge thanks to Roanna for introducing Jenny Brown and myself, and for organising – and all the staff who helped out! Thanks as always to Jenny for her hard work and for chairing.

There was a write up of the evening by Love Books Group. Check it out.

More news – I will be on BBC  Radio Scotland on the Janice Forsyth Show hosted by Edi Stark TODAY from 2.44pm, and after me 404 Ink (makers of Nasty Women and general all-round excellent women themselves).  Listen live online here, and find the archive if you miss it.

The Unsung Letter No.3

The latest tinyletter of book recommendations for the underpraised has now gone round. This week it’s poet and writer Claire Askew writing her love of a particular Edinburgh-based poet. If you haven’t yet subscribed, you can do so >>>>>here<<<<<

Filed under consolations of reading

Tagged as books, the now, the unsung letter

At the behest of some twitter enablers, I have set up a tinyletter, which, if you’re not familiar with the term, is a bit like a blog that you can subscribe to and have it come to your inbox. A lot like a blog, then. But quite popular now.

The tinyletter in question is The Unsung Letter, a response to the lack of word-of-mouth that some books receive on publication. It seems that certain books are doomed to obscurity from the start, when they really should be read and sung about and passed around and bought, and the writer of the book given a brief clap on the back to let them know that yes, their words were heard, and connected to others. SO. The Unsung Letter will be a once-weekly post from a different writer/bookentity/nanotechnologist/lover of the newly obscure, recommending a book that they think people should read. And at the bottom of the post, there will be a link to buy that book, and a bio of the post writer.

A good few good people have already volunteered to write posts, so I expect this project will be a fun and fruitful one. Here’s to singing praise for the good books. The first missive is live, and to introduce things, it’s a recommendation from me. It can only improve (but I think you will like the book I recommend)

(It’s free and only takes an email address to do)

On the Edges of Vision has been mentioned in this gloriously long list of the year’s anticipated titles on Electric Literature. I’ve been through the list and already seen some things I definitely have to check out (that I might otherwise not have heard of). It’s a great resource for those of you looking to support small presses and find something you’d like. Or something that will melt your brain or heart, if a stronger metaphor is needed.

If you want to get more of an idea of the collection (beyond the essay on monsters that Tobias Carroll kindly links to), you can read some published pieces here on my fiction page.

I’ve decided that for my Endless Reads project 2015 I am going to read as many novellas as I can. Slim little pieces, tender weird harrowing classic innovative bright calloused intriguing lyrical stark books under 150 pages long (though I’d prefer around the 100 page mark). I have read shamefully few novellas, and having just written one and hoping to write more, I really ought to know the territory a little better.

To that end, I’ve started a new shelf on my Goodreads called Novellarama – if you aren’t friends with me already and you are on Goodreads, please send a request! That way you can recommend books to me (which I shall try to buy from places other than Amazon, to mildly scupper its having snaffled up Goodreads recently).

I’d love as many recommendations as you have to offer – that way I can pick and choose for a whole year. Top of the list so far are:

Four Novels, by Marguerite Duras, The Diving Pool by Yoko Ogawa, Toni Morrison’s Home, Ordinary Love and Good Will by Jane Smiley, a collection of novellas by Deborah Levy, and Ottessa Moshfegh’s McGlue. There are many more on the list. Donations welcome, if you happen to have them lying around (or want to swap books with me).

Novellarama will start on the 1st of January and hopefully result in a spate of equally tiny reviews for you to enjoy. If anyone else is joining in I will link to your blog periodically and peer at what you’ve enjoyed.