Helen McClory is a writer born and educated in Scotland. She grew up between the isle of Skye and Edinburgh, though has also lived in Sydney (for graduate studies) and in New York City. Currently she lives in Edinburgh. Her books to date are

On the Edges of Vision,

and Flesh of the Peach.

She is represented by Jenny Brown.

Mayhem & Death, a collection of flash fictions, short stories, prose poems and the novella ‘Powdered Milk’ was published in March 2018. Margaret Atwood said (of it and McClory’s earlier work On the Edges of Vision) “Shiny dark licorice mind candy: nothing quite like them”. The Skinny (*****) said:  “Her finest work to date, Mayhem & Death is a staggering achievement – a beguiling and essential work.” Helen appeared with Camilla Grudova (author of The Doll’s Alphabet) at the 2018 Edinburgh International Book Fair.

Ali Smith named On the Edges of Vision, reissued in 2018, one of her books of the year in the Observer, saying, “[McClory’s] edgy stories transmit the strangeness of realities in a way that’s comforting precisely because so unsettling. She’s a writer completely unafraid.” 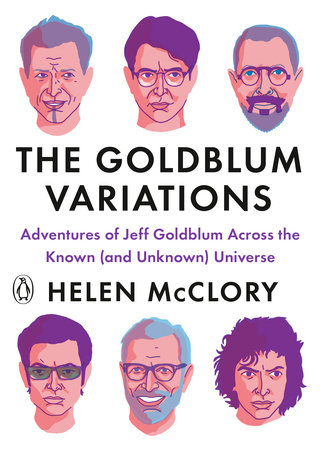 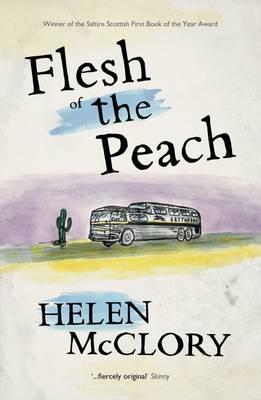 Helen’s debut novel  Flesh of the Peach was published in March 2017.  Flesh of the Peach tackles the immigrant experience, grief, art, violence and desire in various guises – all sprawled across the big landscapes of the New Mexican Southern Rockies, NYC, and the Cornwall of the main character’s childhood. The Skinny called it “an exhilarating debut. It houses a story rich and full.” The Herald called McClory “one of the best new writers to have emerged in Scotland in the last few years.” The launch was in Blackwell’s Edinburgh on the 25th of April 2017 and Helen wore a gold jumpsuit and vintage cape at it, because the internet advised her to do so. She appeared at the Edinburgh International Book Festival with Meena Kandasamy on the 15th of August, 2017.

On The Edges Of Vision, a collection of flash fictions, prose poetry and longer form pieces came out originally from Queen’s Ferry Press in August 2015. The book won  the Saltire First Book of the Year Award 2015 and was longlisted for the Saboteur Awards Best Short Story Collection 2016. Two of the pieces from the collection, “To String” and “The Mistress of the House on the Machair” were nominated for the Pushcart Prize. Another, “Lope”, was shortlisted for the 2014 Bridport Prize.  On the Edges of Vision  has been reissued by 404 Ink to coincide with the release of Mayhem & Death. Here’s a list of publication links for some of the pieces in both collections.

That’s me on the left, paying rapt attention to Laurie Foos at Kramerbooks in Washington D.C.

On the Edges of Vision originally launched in Waterstones Argyle Street on the 20th of August. Helen McClory took the book on Kickstarter-funded US tour from 24th of August to the 6th of September 2015, reading at bookshops up and down the American East Coast. View the tour blog, archived here. Have time for a podcast? Here’s two – Mr Bear’s Violet Hour Saloon (in which she and Mr Bear read from On the Edges of Vision) and Book Fight (in which Helen talks about one of her favourite books on female (toxic) friendships, Paulina & Fran). Or have a look over on the Press section for reviews, interviews, and more.

From the 31st of October to the 7th of December 2013, Helen was a Creative Futures Artist-in-residence at the Banff Centre, Alberta, Canada. Search posts tagged ‘banff’ for more on her experiences there. Before She went, She had just finished a stint as Writer-in-residence at Necessary Fiction. Check out her project – bringing attention to Literature of the Girl – in their archive (September 2013).

If you would like to ask Helen anything, or would simply enjoy a chat about writing and bookish matters, say hello on twitter: @HelenMcClory. Interested in having Helen speak at your event, school, college or uni? Find her in the Scottish Book Trust’s Live Literature Database.