Flesh of the Peach: Netgalley and Finished Cover 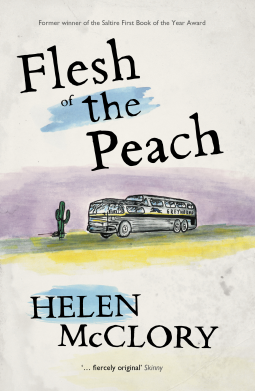 (it’s all scuffy-looking in real life, which I love)

My debut novel Flesh of the Peach is now available to access on Netgalley, an online service that allows publishers to grant early access to their titles to the people who might read it and promote it to others. That means if you’r a reviewer, bookseller, librarian or journalist, you can request a title before it makes it to the shops. Here’s the link to Flesh of the Peach. Review copies have started going out, so I have thrown myself into my work in order not to think about that much at all (I still do). If you’re a bookseller and think you might like to have me read, please get in touch (hlmcclory at gmail). I’m fond of it, and I can go wherever there’s a cheap flight or bus and a friendly face at the other end waiting for me.

It’s March and still cold and grim here, so I don’t have many pictures to show you. I hope I will go outside for longer stretches, and then have something green to share. I dream of flowers. One way to fulfil the need for blooms is to follow writer Alyssa Harad’s #FlowerReport every Sunday on her Twitter feed. Flowers from all over the world, showing it’s always Spring and Summer somewhere, even if that somewhere is a vase on an indoor shelf.

As soon as I see something more than a sorrowful bent-over daffodil I’ll share it with her.

As a reminder, the book launches in Blackwell’s Edinburgh on the 25th of April. Tickets are free and available here.

Flesh of the Peach‘s pub day is the 20th of April, and you can pre-order now from Freight, which is a good way to support the press directly.

An excerpt from Flesh of the Peach appeared in 3AM Press (back before the character’s name changed) and Sundog Lit.

Tagged as alyssa harad, book reviews, flesh of the peach, FlowerReport, I dream of an elusive Spring, publishing, the now

The fourth Unsung Letter is now out to subscribers. This week it was written by Andrew Male:

Davidson is attune to the specific emotional poetry of his world; dark afternoons, slow evenings, lucent midnights, and that that eerie border territory between the harvest and the back end of the year, where distances grow deeper and a deceptive autumnal sunlight illuminates banal frosted landscapes with an hallucinatory brightness.

In other, non-letter news, this year continues. This year, a whirlwind, both in the political sphere (of which I need not tell you) and personally. D and I came back from Christmas in America, strove through January ( which is as everyone knows one of the months we should just spend in hibernation like Moomins) flathunting and dealing with travails and the bitter cold. This past week we went on a long-ago holiday to Athens:

then on the way back I fainted on the plane and later in the queue for border control and had to be pushed through the airport in a wheelchair. I’m fine now – it was food poisoning meeting exhaustion, we think – and after a day in bed, it was moving day. I’m writing this in our new rental flat, in a pale blue-green room that makes me think of the sea. Nothing is particularly well organised at the moment, but outside there is a tiny garden with a bench and a greenhouse. I’m going to put up a bird feeder and sit out with a book when it’s not so raw.

Soon, quite soon, my debut novel Flesh of the Peach comes out. I had word today that my 6 copies are being sent to me today. Ah! There’s a book launch to come and I’ll make an announcement about that very shortly. I’ve to organise contact with several bookshops who might be amenable to my reading there. It all seems so far off from now. In April it will be Spring, even here in Scotland. Not warm really, but there will be flowers out, and more birds, and the world opening up its shutters, wincing and taking deep breaths.

For now though, the work.

The Unsung Letter No.3

The latest tinyletter of book recommendations for the underpraised has now gone round. This week it’s poet and writer Claire Askew writing her love of a particular Edinburgh-based poet. If you haven’t yet subscribed, you can do so >>>>>here<<<<<

Filed under consolations of reading

Tagged as books, the now, the unsung letter

‘The Beautiful Birds of the Aftermath’ in Gutter no 15

Squint and you can see my name on the cover

The new issue of Gutter is out now, and features one of my stories from Mayhem & Death – as well as a wonderful review of On the Edges of Vision. My book turns one year old on the 18th of this month. It was launched at Waterstones Argyle Street, right before I headed out on the American book tour. Hard to believe that it’s been a year already! I’m still not over the book winning the Saltire First Book of the Year award either.

A year, a year – and what have I been up to lately. I know I’ve been quiet here. Much of that is to do with the fact I’ve been working away on line edits for Flesh of the Peach, coming out next spring. It’s been a wonderful process, neither too invasive nor not rigorous enough – edits from an excellent editor are so important for tweaking bits into focus and letting the heart of the novel shine through. Now the book is off to the proofreader, and I’m anticipating the next phases: the cover and blurbs. Still floating ahead of me in the dusk. While that happens, I’ve work to do on the witchy novel I’ve spoken about here. Drafting and redrafting. Circling in on what is important there. The bones and the flesh of the thing refined. It’s easy to get discouraged at this – so far from the finish line that it seems to be an impossible distance away. It’s been almost two years since I completed the novella version of the book, and by optimistic calculations perhaps another year before it’s finished. I think come the autumn it will be easier. It’s an autumnal book, a little eerie, a little surreal. Littleg at all in kinship with Flesh of the Peach, which is, as my editor said, a ‘dark star’ of a novel. But part of me now, having read the earlier book, wants to bring something in line with the latter. I might have to dig down for texture, something a bit brutal – but trying to do so without crushing the sweet, folktale feel I want it to have. Hmm. Work to be done. I’d better get started.

If you’d like to buy Gutter no 15, here’s the link. You’ll be supporting writing from Scotland and elsewhere. Lots to read and much to discover, and only £6.99.

Tagged as flash fiction, flesh of the peach, Gutter, Gutter no 15, Helen McClory, short stories, The Beautiful Birds of the Aftermath, the now

I know it’s coming on April Fools Day, but we’re after noon here in Scotland, so I’ll go ahead:

You may have seen that my book Flesh of the Peach is due out with CCM in October of this year – well, things have changed quite dramatically:

It’s now, instead coming out with Freight in about a year.

The decision to go with Freight, a brilliant rising press based in Scotland, means that among many other benefits, when the book is out, it will be far easier for readers (and bookshops) to find copies. I’m really thrilled at this, and at a chance to work with the team at Freight.

I’ll keep you up to date on any other developments with Flesh of the Peach and with my other exciting news.

Now tea, and working on the new witchy book and thinking of projects ahead…

UPDATE: Here’s a short piece on The Bookseller about this!

Tagged as flesh of the peach, Freight Books, Helen McClory, publishing, the now

It’s been very quiet here – a long, tough winter. Finally we’ve passed the first day of Spring, and light and warmth is slowly coming back, like feeling to a foot that’s fallen asleep. With the change in the season comes two pieces of good news, the first of which I can share here:

The other piece of good news will have to wait a little longer. It’s bookish too.

Meanwhile: a little more quiet working in the background. Edits and waiting for the first adventures of the year. I hope soon to have pictures of the outside world. I think the blog has been a little sparse without them.

Wishing you all a fine spring (or autumn) day, wherever you are in the world.

Falling over the finishing line

ten whole stories, some of which might be usable in the collection.

Thanks to wonderful people on Twitter who provided encouragement and prompts. You can see their words and mine HERE (along with the numbered first lines of every story I wrote today. I think the wavering in terms of quality is pretty evident).

As I say over on Twitter, if I just wrote like this another 4 times I would have enough stories for a whole collection. They would also be terrible, and I might fall apart doing so. But it’s been good to see what can be done in a single day. Edits, now. Those will come. A long time hence.