Endless reads review: Nights at the Circus by Angela Carter 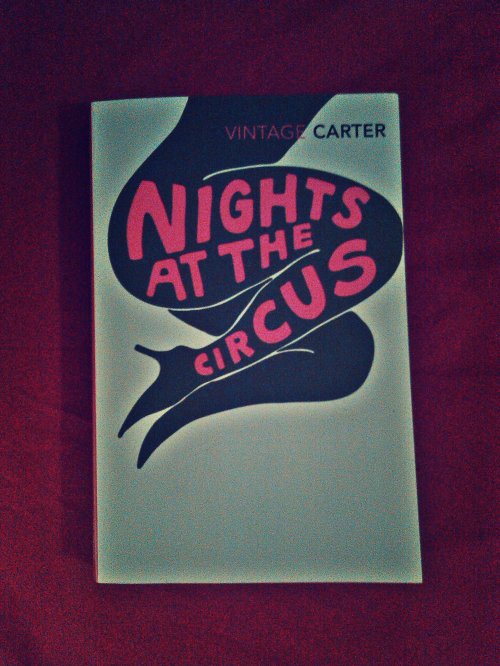 Suitably grainy I hope, for this book – the story of end-of-the-19th-century aerialiste Sophie Fevvers, the ‘Cockney Venus’ and a woman apparently endowed with six-foot wings. A freak or a con artist – Jack Walser, all-American reporter, is out to uncover the sordid truth. Call it ‘Interview with the Valkyrie’. Nights at the Circus was recently named best ever winner of the James Tait Award – the oldest literary prize in the UK. The book came out in 1984, making it slightly younger than me, but the prose has an exuberant, antique style that will be familiar to you if you’ve ever read The Bloody Chamber (my review on Goodreads here).

It can be a little irritating at first to slip on Carter’s cloak of furs and whalebone – all those adverbs, and exclamation marks, and the word ‘surmise’ every few pages or so. She breaks about every writing rule on any of the fine puritan lists there are out there. She throws big words at you like confetti, allusions to philosophy and politics and feminism and theories of language bubble up through the velvet soup.

So too, do the biases of empire (this is very much a book of old empire, of the magic of acquisition, manor-houses, the dreamy, rotten, lost glamour of pre-revolutionary St Petersburg, the Shamanic Siberian wastes of a richly English imagination. Native Americans are alluded to as scalp-stealing barbarians. People of Mongolian heritage and Chinese-made automata alike are ‘inscrutable’. The Kentucky Colonel ringmaster is straight out a child’s colouring book of stereotypes.

But for all these faults, this is one of those books that attempts to both tell a story and truly bewitch you. Invites you in and will, if you let it, sweep you into a magical world that might just be frayed tapestry and candlelight and incense – but with the curtains shut tight, and your eyes locked in to the rhythm, it seems churlish to reject it altogether. Nights at the Circus is, in this way, a perfect book for Winter, for reading over hot chocolate, as the wind howls or the snow falls, and midnight strikes three times in one night, just for you.

Thoughtful Hedgehog reflects back on her career.

Quick link to a story I wrote – one of the first I managed to finish (aside from my forays into book writing when I was ten): Blue Eye of Siberia. It was written in 2007 or so, and published in From Glasgow to Saturn, issue 12. I can’t link to it directly here for some reason. This is inspired by Teri Carter’s post, The Five Year Gap. Looking back on what I wrote is interesting – I still have the same interest in female friendships and antagonisms, still a slightly supernatural bent to the imagination. It’s good to see I have made progress in the writing since then, and in my ability to order things. Thanks, Teri, for giving reason to pause and reflect, something I — all of us, I suppose – should do as often as possible.