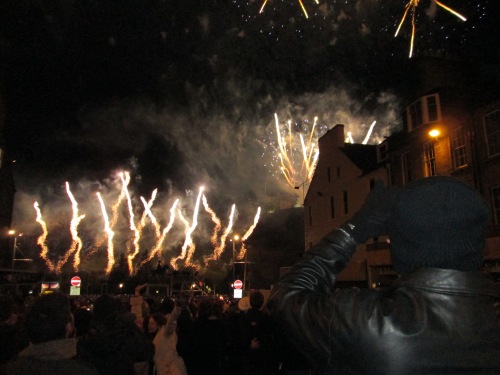 Happy 2013 everyone! This picture was taken at the Edinburgh Hogmanay celebrations last night. Not visible past the fireworks is the castle up on the hill. There were about 80,000 people in the city centre, according to the BBC, but I think that was on Princes Street alone.

The title of this post comes from something an enthusiastic drunk English man said to my friends and I as we were walking home – he informed us that January is the best month of the year, his favourite month, anyway. Happy January, he said, and he seemed convinced.

In the spirit of celebrating the new month, I’m going to be announcing the winner of the ‘place’ photo competition later today – I had so many good entries that I’m going to have to defer to my family as judges. They’re coming over for the traditional Scottish New Year’s Day meal of steak pie and clootie dumpling (one of these I’ve made gluten free for me – I get salmon for a main course). After the meal, I’ll show them your pictures and we’ll take a vote. So come back later on to admire/be jealous of the winning entry.